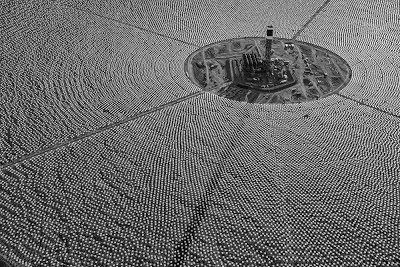 This photo is of a solar thermal power plant that, once fully operational in 2013, will be able to power 140,000 homes.  Solar thermal plants generate energy from the sun by using thousands of heliostats (basically, curved mirrors) to concentrate sunlight onto a central tower (seen in the center of the circle on the photo) so as to generate steam.  The steam is used to spin a turbine, which generates electricity--all without the use of fossil fuels.  What's more, through the use of molten salt, the heat can be stored and released at night, generating power 24/7.

The problem is that this project, and most large-scale renewable power plants, use a lot of land...land that is often untouched and home to endangered flora and fauna.  Below is a photo of the land on which this power plant was built before work began: 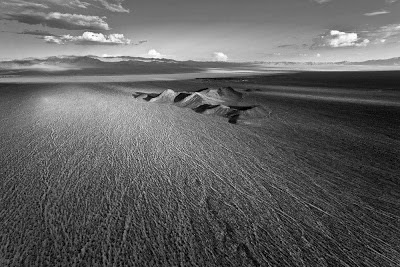 The land is beautiful, pristine and, it turns out, home to the habitat of a threatened desert tortoise.  In response, the developers of the power plant have already allocated "56 million to care for and relocate the tortoises."(Source: Wired)  Still, some argue that the plan should never have been built on this location, and this brings us to the core conundrum: we have a technology that can create carbon-free energy on a large scale and cost-effectively, thereby tackling climate change and reducing traditional pollution, but at the same time it has a large footprint and affects nature in other ways.  So what do we do?

My background is in environmental studies, and I've thought about these issues for years, so I have a few thoughts.  My first reaction is, give me a break: coal plants spew mercury, nitrous oxide, sulphur dioxide and carbon dioxide into the atmosphere.  The mining of coal leads to water pollution and the destruction of entire mountain tops (see photo below from West Virginia) and requires that coal miners put their lives--and their health--at risk.  Nuclear plants produce waste that is radioactive and difficult to store.  Natural gas and oil plants burn fossil fuels.  If we can put up with the tradeoff between traditional fuel sources and the imperative for cheap fuel, then can't we do the same with a clean source of energy?  What's more, climate change poses as much of a threat to habitats and species as a solar thermal plant. 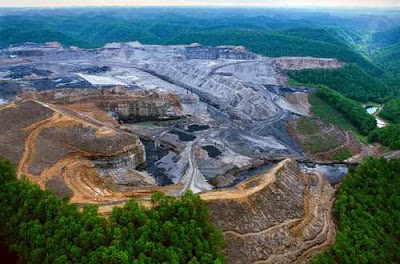 That said, my next reaction is to ask if there are alternatives.  To be sure, we can do our best to locate large-scale renewable energy plants on sites that are not environmentally sensitive.  But it's not that easy: for them to be economically viable, they must be sited near existing power lines and roads, and there are other considerations, such as existing ownership of the land, cost, etc.  As was done on this project, efforts can be made to mitigate the environmental impact of the project.  However, no matter how much hand-wringing we engage in, we're going to have to accept that there is no silver bullet--either we accept that producing a lot of clean energy has other impacts (on habitats, on water usage, etc), or we accept the status quo (air pollution, climate change...).

The only point I want to make is that, unlike traditional energy, clean energy lends itself to decentralization.  As much as we need massive clean energy power projects, we also need solar photovoltaic and hot water arrays on rooftops; we need smaller wind mills on farms; and we need other smaller, distributed power plants.  The reasons are many.  These projects create jobs; they improve the stability and reliability of the energy grid; and they lower the cost of the technologies in question.  It's true that we could carve out a large chunk of desert in the American Southwest, fill it up with solar thermal and photovoltaic plants, and power much of the country that way...and maybe we should do that, accept the environmental pros and cons, and move on.  Or, we can maintain a mix of centralized and decentralized power sources.  After all, if much of our power comes from one place, then we are vulnerable to terrorist attacks, natural disasters and human error.  But if our power comes from a myriad of sources and places, those issues are negated.

I'm not sure what the answer is.  I think that renewable energy is beautiful and absolutely where we must go, and the faster and more cost-effectively we switch to clean energy, the better.  But I have a solar electric array on my roof, and whenever I see a shadowless, south-facing roof drenched in sunlight, I bemoan the lost opportunity to harness that energy.  Obviously, economies of scale say that my solar array, on a per-unit-of-energy basis, will always be more expensive than the project in the desert, but we've seen that there are other considerations.  Jobs, environmental stewardship, energy security and stability--these are all reasons to invest in small-scale clean energy, too.