Cooking Classes: The Where, the Why & the How 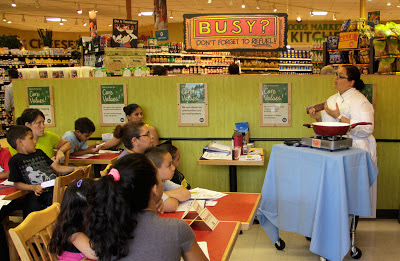 What it Is
A few days ago we started offering three Community Cooking classes to low-income Providence families.  The classes are being funded and hosted by Whole Foods Market on Waterman St. in Providence and the curriculum is one designed by the Rhode Island Community Food Bank. The 30 participating families will attend eight (8) weekly classes during which they will partake in a cooking demonstration, learn healthy eating concepts, and receive a free bag of groceries (donated by Whole Foods) with which they can perfect healthy recipes at home.  Part of the power of the classes is that, by including the entire family in a fun environment, the kids are more likely to be willing to eat healthy foods and, in turn, the parents are more likely to make them!

If you're reading this I think it's reasonable for me to assume that you are interested in social and/or environmental justice and that you contribute a least a few hundreds dollars a year to charitable causes.  Given that for four years I've run a non-profit and constantly though about social change, I'd like to pose to you what I've come to see as the fundamental question in this space: if someone gives you $100 with the instruction that the funds be used for maximum impact on the issue of your choice (education, climate change, crime, etc.), what should you do with the funds?  Until this question informs our charitable giving and social policy, we can't transform social businesses--be they for or not-for-profit--into a true force for societal transformation.

Now, the decision of how to spend those $100 is typically made in one or more of the following ways (this list is obviously not exhaustive):

So what's the problem?  Simply put, it's that none of the above decision points get at the fundamental question, which is what is the social impact per unit of money spent.  After all, if $100 to Agency A increases educational outcomes by, say, 10%, and Agency B increases them by 3%, then the funds should go to Agency A.  Note that this is true irrespective of the percentage of administration versus program or any other potential reason for making the donation.  Of course, we know that this is not how things work in actuality.  Why is this?  I can identify several reasons:
Obviously, endemic social issues are endemic for a reason; if there were easy to solve, they would have already been solved.  That said, I firmly believe that we have all the tools, resources, ideas and business models needed to eradicate global poverty, solve climate change, and so on.  What we lack are enough people to do the implementation and a smart approach to funding effective interventions.

Because we don't ask the fundamental question--to repeat, 'What is the most impactful way of donating/investing a unit of money?'--we end up with a paradigm in which the vast majority of non-profits continually receive funding despite having little to no evidence of effectiveness.  A provocative statement, no?  Consider this: in 1965, when Lyndon Johnson launched the War on Poverty, the poverty rate was around 19%, there were 282,000 non-profits and $91 billion was donated to charity. Today, there are 1.6 million non-profits, the poverty rate is around 16% and $298 billion is donated to charity every year. Similarly miniscule improvements in educational outcomes, reductions in crime or prevention of homeless are also seen over the last six decades.  If non-profits were truly effective, we would expect that as charitable giving and the number of non-profits went up, there would be a concomitant reduction in the social issues they seek to solve.  Unfortunately, that is not the case.

The answer is not more non-profits, nor is it necessarily more donations.  If we ask the fundamental question, we will be forced to re-allocate funds in the most judicious manner.  What's more, the increasing popularity of social enterprise means that organizations are more and more likely to use earned-income strategies, thereby reducing the need for overall charitable giving (or at least meaning that it can stay constant while still significantly increasing impact).

I'm not saying that Capital Good Fund has the right model or is the best place to donate those $100.  But I do know that every night I ask myself that question, and we are one of the few organizations in America running an RCT to look for the statistically significant impact of our products and services.  Just some food for thought!