My last post on the Ice Bucket Challenge focused on what I think is the key question: how do we transform nonprofit giving from a zero sum game (there's only so much money to go around; what I give you I won't give to another org) into one of abundance (total charitable giving, as a percentage of GDP, increases each year).

This morning I read the best article on the subject that I've seen: Why the Ice Bucket Challenge is bad for you (Maclean's).  The author, Scott Gilmore, makes two phenomenal points:

"First, ALS research is not an especially great need in public health. It is classified as a rare disease and, thankfully, only about 600 people die from it every year in Canada. That sounds like a lot, but that is not even close to the top 20 most fatal diseases according to StatsCan (the top three being cancer, at 72,000 deaths per year; heart disease, at 47,000; and cerebrovascular disease, 13,000). 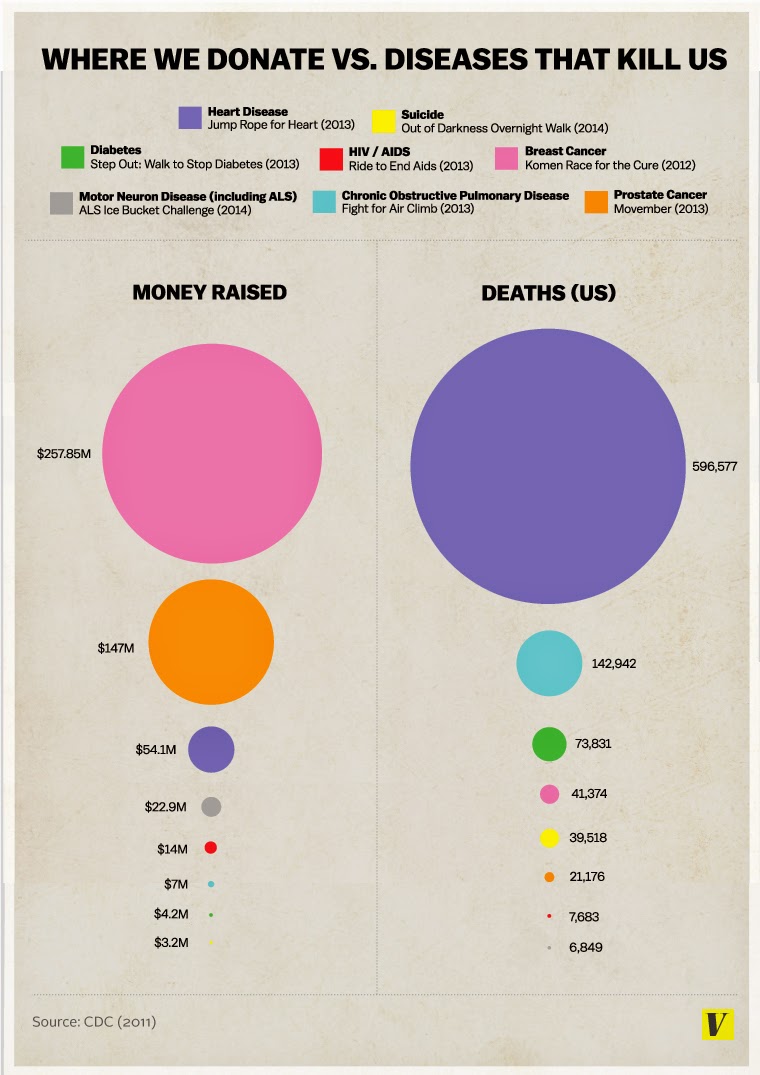 "Second, it is already extremely well funded. As this chart from CDC data shows, last year ALS killed 6,849 people in the U.S., and attracted $23 million for research (a ratio of $3,382 per death). Heart disease, by contrast, killed 596,577 but only raised $54 million (a paltry sum of $90 per death). If you want your donation to make the biggest difference, fund the diseases that need the most money."

That CDC chart (right) really tells the story.  Look at the imbalance between what we fund, and where the funding is needed; the largest killer of Americans is heart disease, however breast cancer raises the most funds ($275 million vs $54 million).  Put another way, even though over 10 times more people die per year from heart disease than breast cancer, the latter raises ~5 times more money than the former.

Why does this happen?  Simply put, charitable giving is, for the vast majority of us, not a rational thing; we give to that which tugs at our heart strings, or gets our attention (celebrity endorsement, media coverage, ice buckets...).  Unfortunately, if we are to really maximize the impact of our charitable giving, we would be well served to pay less attention to our hearts and more attention to our minds.
Posted by Andy at 11:54 AM